Religious rituals, demonstrating artistic expression and a calm and reverent attitude to treating children are the key tenets to parenting in Bali.

Driving through the trafficked streets of Kuta recently I was alarmed to see a little Balinese boy no more than three years old inadvertently step off the pavement and onto a busy road in order to better see what a vendor was selling on his bicycle food cart. My parenting instinct was immediately triggered and I was on red alert to jump out of the car and pull him to safety. As I watched I saw the vendor gently take the little boy’s hand and steer him back onto the pavement calmly and without fuss. There were no recriminations or raised voices.

Another night at a restaurant a toddler from Australia was veering around the tables crashing from calamity to chaos while his tired parents obliviously enjoyed their meal. I watched the Balinese security guard from the restaurant scoop up the little boy as he was about to launch himself off a step and then carried him around the restaurant singing and laughing before returning him to his parents. There was no blaming or judgement or any expectation of reward, it was an instinctual gesture of caring for children that I rarely see in Australia, particularly when eating at a cafe or restaurant.

Visitors to Bali with children can’t help but notice the delight and interest that Balinese people take in both Balinese and visiting western children. And if you look a bit harder you notice that Balinese children appear to be unencumbered, happy children who take care of each other and are invariably polite and well- behaved.

Balinese parenting is strictly guided with rituals and beliefs that appear to have changed little over time, even with the influx of tourism to Bali and the introduction by the Indonesian government of a western style of education. A Balinese form of Hindu religious rituals unique to Bali are still central to Balinese daily life, children are believed to be sacred gifts from the gods and are highly valued in Balinese society. Children spend a lot of time with extended family and friends and learn religious practices as they learn to speak and walk. Participation in religious life is not a choice but an unspoken expectation.

The first ceremony of a Balinese takes place in-utero, around the sixth month of the pregnancy. A ceremony with offerings is conducted to ensure the well being and health of the baby. Once the baby is born the placenta is placed in a coconut which is wrapped in a white cloth and buried near the entrance of the parent’s household.

Between the 12th and 42nd day of the child’s birth the mother and baby are considered unclean. Therefore a series of ceremonies take place in which both are purified in order to participate in Balinese festivals and religious events.

The 105th day is one of the important days for the child as only then will it be given a name. Also during this Bali ceremony the baby is fully welcomed into the family.

The baby is carried at all times until the Otonan ceremony, which marks the child’s departure from the divine world into the human world. On the 210th day, the baby is allowed to touch the ground for the first time. Because the ground is considered impure, the baby has always been carried around up to this day. As a result most Balinese babies don’t ever crawl.

When a Balinese boy or girl reaches adolescence the important and painful tooth-filing ceremony takes place, usually before marriage. It is believed that filing down the teeth keeps the Six Enemies at bay: lust, greed, anger, intoxication, confusion and jealousy.

Strong emotions by parents and their children in Bali are avoided and discouraged. Emotional upsets are believed to weaken or endanger a child’s life-force so babies are treated with extreme care and calm. An important part of parenting is teaching the child emotional control. Tantrums are ignored.

Artistic expression also continues to permeate daily life in Bali. Exquisite offerings are handmade by women from palm leaves and offered three times a day to bring prosperity and health and appease the gods. Children will either watch or assist with this. Children are an integral part of dance ceremonies and performances and, depending on their family’s profession are encouraged to learn carving, painting, shadow puppetry, sculpture, mask making or jewellery production.

Bali is often referred to in discussions about the controversial attachment parenting Continuum Concept introduced by Jean Liedloff who advocated co-sleeping, breastfeeding on demand and constant physical contact with the mother. Liedloff believed that this style of childcare led to greater self-esteem and allows the child to become more independent than those whose cries go unanswered for fear of “spoiling” them.

In isolation though, the concept of attachment parenting in the west has little in common with the Balinese style of child rearing which is steeped in religion, ceremony and village life. Parents now need to make their own decisions about what’s right for their family and support others who have made different choices without judgement or criticism. Unlike parents in Bali, we no longer have a set of ceremonies and rituals to guide us, and the myriad of choices and theories that we have available to us can make the challenge of being a good parent all the more difficult and confusing. We can create our own ceremonies and rituals and by recognising and celebrating appropriate rites of passage in our children’s lives we create a sense of family and community. As the Balinese have shown us, creating a supportive community that accepts and embraces babies and children can be a joyful and happy place for everyone. 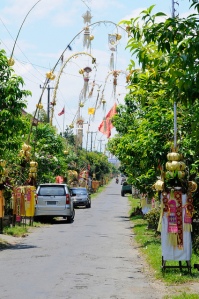 23 thoughts on “The secrets of Balinese parenting”